The incessant rain notwithstanding, we’re almost into boating season.

There were a few things that I hadn’t done to ready the kayak for its launch, one of which being the end pour. The purpose of the end pour is to reinforce the tips of the kayak, particularly because it is not possible to run the fiberglass tape into the ends, and to cause a visual distraction for anyone driving by.

The end pour is achieved by standing the kayak on end, standing on a ladder, lowering a resin-filled container to the tip, and then overturning the container, thereby depositing the resin into the tip. What follows is the most enjoyable part of the process — enjoying a beverage while the resin hardens.

Here’s the bit of information that I found difficult to find on the internet. I didn’t want overheated, liquid resin to fall on my head on flipping the boat, so I was curious about how long it would take for the resin to harden. Here are the details: I mixed 6 – 8 ounces of MAS epoxy with fast hardener. By the 10-15 minute point, the resulting goo was hot to the touch and after 30 minutes or so, the mixture had hardened. All in all, a perfect period of time to stand around and enjoy a beverage.

There comes a point when it’s no longer possible to affix strips to the internal stem. Stripping the resulting opening — the football — can be accomplished in a variety of ways. Many builders strip one half of the football, cut the excess along a straight line, and then finish the other half. It’s a nice effect when done well, but falls apart if the two halves don’t match each other perfectly.

I’ve opted for a different method for the following reasons:

Instead, I’ve opted to run two strips along the centerline and then fill the halves using a herringbone pattern. 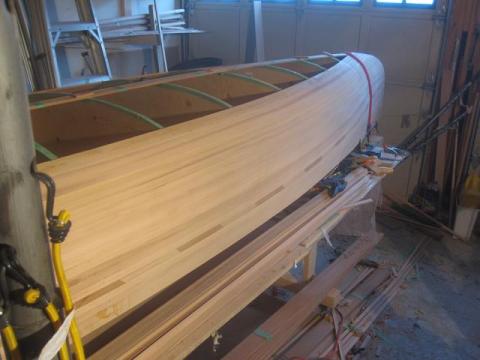 Running the two center strips requires some careful beveling as the hull at the ends have a pronounced angle. Towards the middle of the football beveling is less of an issue as the bottom of the canoe is relatively flat.

Here are a couple of other notes on running the center strips:

Here’s a picture of the football with the center strips in place: 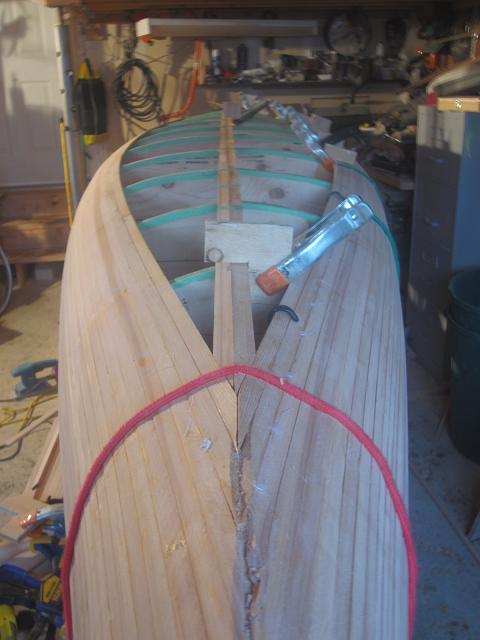 Now for an admission of fallibility…

You’ll notice that the center strips don’t align perfectly with the strips in front in the picture above. On measuring the distance between the sides and the centerline, I noticed a small discrepancy (less than 1/8th of an inch) between the sides. Fudging the strips (as above) corrects the discrepancy. Fortunately, the external stem will cover and disguise the adjustment.

On another note: After stripping the canoe with bead and cove strips to more easily navigate the curve of the bilge, I’ve transitioned back to square edged strips. I’ve found that using bead and cove strips when filling the football tends to damage the cove, particularly if you’re fiddling around with adjustments and dry-fitting the strip multiple times. Running a rolling bevel for this part of the build is less aggravating (for me, at least).

At any rate, I’m just about done the accent strip, which consists of alternating light and dark western red cedar sandwiched between two strips of douglas fir. 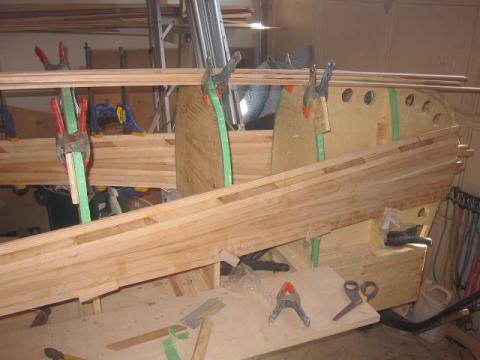 I’ll soon transition to bead and cove strips to more easily strip the curve of the bilge.

You are currently viewing the archives for May, 2011 at greybeard canoes & kayaks.